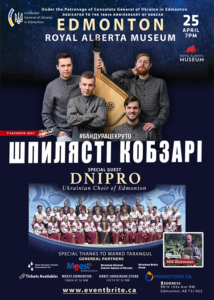 Dedicated for 180th anniversary of first edition of “Kobzar”.

The Ukrainian Dnipro Choir of Edmonton, founded in 1953, has just begun its sixth decade of singing. A non-denominational mixed-voice community choir, Dnipro’s membership encompasses singers of all ages and occupations. Its repertoire draws from the large and immensely rich repository of Ukrainian choral music of all genres – sacred, art, and folk – with a special emphasis on the performance of contemporary and newly-commissioned works.

Home Is Where the Art Is