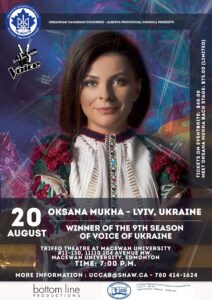 Oksana Mukha is a Ukrainian singer from Lviv and winner of the 9th season of the VOICE Ukraine.

Her repertoire includes Ukrainian folk songs, academic, neoclassical and her own written music. From 2007, she has been working with composer and producer Dmitry Katsal (head of the legendary choir “Dudaryk”). She later became the winner of the Grand Prix and the International Festival named after Kvitka Cisyk (2011), where she was named “Ukrainian Kvitka Cisyk.” In 2012, Oksana Mukha released her first CD “At Vatry”. Furthermore, she has collaborated with leading Ukrainian artists on a number of iconic projects such as “Ivasyuk” and “Ivasyuk – Reload” (2013).

Through her wide variety of performances, Oksana Mukha has successfully captured the attention of listeners all over the world. She now performs around Ukraine, Europe, and North America.